“Having heard about the rig-out of the women and girls, listen how the men are kitted out. For sure, even more strangely than the women, and particularly the rural people and the savages; for they were shorn and shaved one palm above the ears, so that only the tops of their heads were covered with hair. But on the forehead they leave about a palm of hair to grow down to their eyebrows like a tuft of hair which one leaves hanging on horses between the two eyes. They are strangely bearded, some shave their beards just to just above the mouth and others to below the mouth. Others shave some places and let their beards grow in tufts.These men have their shirts open down to the belt, without sleeves so that they have bare arms. They wrap themselves in a big linen cloth which goes around them one and a half times and stretches nearly from neck to foot, and they have bare feet and bare legs.

Besides they have at their belts very dangerous weapons, such as poignards with three edges having a handle like a bread knife of which the blade is more than an ell long; they know how handy this dangerous weapon is when hurling themselves against their foes; if it strikes them it kills them and pierces them through and through, as it is very sharp. In addition, they carry a rapier with a long handle which they hang in a sash; several have shields and spears and raillons. I saw some who had little Turkish bows which were a yard long, of which the string was a big sinew and the arrows were steel-tipped reeds and feathered to shoot.

These men wear and cover themselves in big hairy coats, over their heads in the same way as the women in Brabant wear their cloaks.This coat only goes a half-quarter beyond the belt and over this is a long linen apron. Thus shorn, bearded, armed and barefoot — as I said — imagine how strange this costume is to look at. I must say, I have never seen anything like this before even in a painting.” 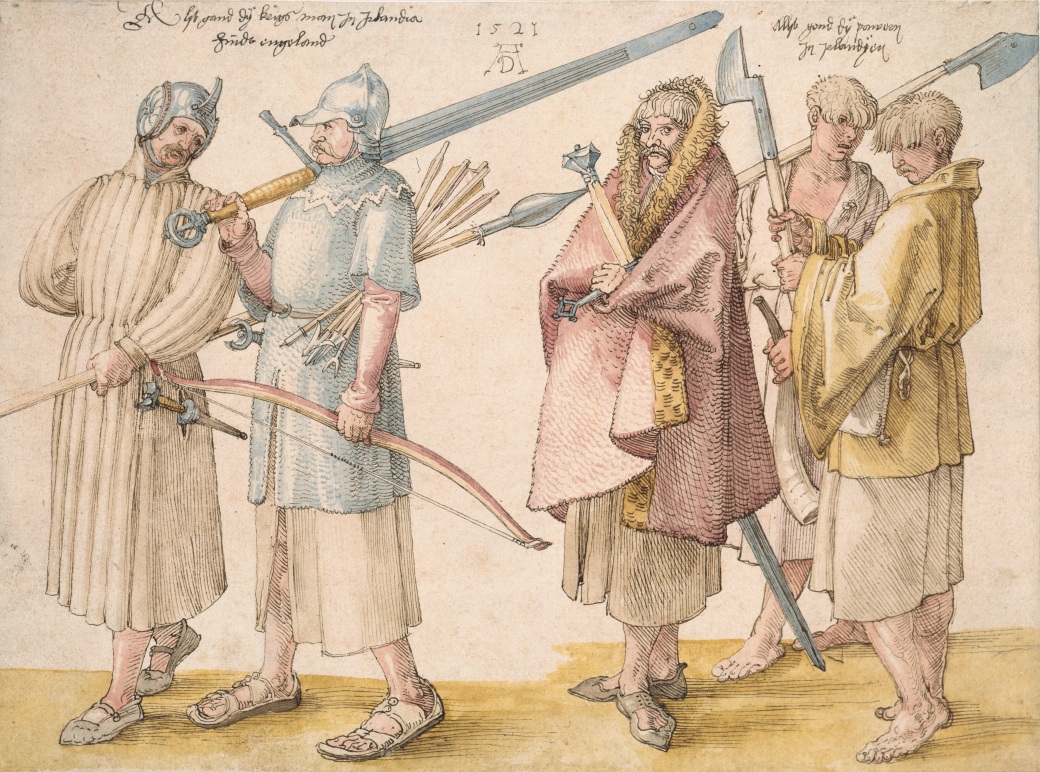